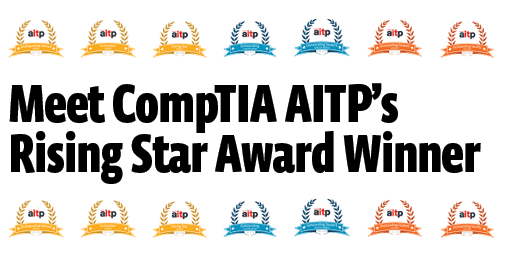 One of the most valuable resources an aspiring IT professional can have is a mentor, especially women and people of color who are underrepresented in the IT industry. Fortunately, rising tech professionals like Susanne Tedrick are stepping up as champions of mentorship and helping to expand the universe of those who see a future for themselves in IT. 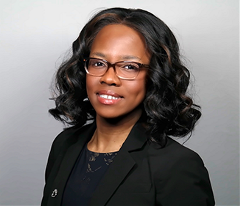 Tedrick is a member of IBM’s Cloud Platform technical sales team and was recently honored as CompTIA AITP’s Rising Star of the Year. She works with cutting edge technology and has a bright future ahead of her, but Tedrick’s career path didn’t lead straight to the IT industry.

“Growing up, I was always interested in technology,” said Tedrick. “I would take my parent’s appliances apart and try to see how they work, but it was never something that was cultivated beyond general interest.”

Her first jobs were administrative in nature, but despite excelling in those roles, she felt a calling to work in IT and engage with the types of technologies she grew up fascinated with.

“I knew it meant a lot of sacrifices would need to be made, but I felt I owed it to myself to see if this is something I’m not only interested in but could do for the rest of my career,” Tedrick said.

She enrolled in IT courses at Northwestern University and joined CompTIA AITP, which she says played a key role in jumpstarting her career by opening up opportunities to meet local tech professionals and learn about where IT skills are needed.

“To make a career transition you need to network, find mentors, and know what’s relevant in the industry,” said Tedrick. “School can only go so far in providing that, and that’s what I was looking for when I joined CompTIA – to fill holes missing in traditional education and augment my transition to IT.”

After recently completing the formal six-month training period within IBM’s Summit Program, Tedrick’s transition to IT is well underway, but she’s passionate about building career paths to the tech industry for more people of diverse backgrounds.

“I’m so happy I’ve made this transition, but there’s always this part of me in the back of my head that wants to get other women, other people of color, and people of all backgrounds and ages in the room,” Tedrick said. “When you have diversity of thought and different backgrounds you get really incredible things.”

On top of working a full-time job and studying online for a master’s degree in Information Technology at Virginia Tech, Tedrick volunteers with mentoring programs such IBM’s P-TECH initiative and Black Girls Code, a non-profit that empowers girls of color from elementary school to high school develop in-demand IT skills and prepare to advance careers in tech.

“I love going to [Black Girls Code] workshops because it’s really important for girls that age to see that women of color can do this and are succeeding,” said Tedrick. She says seeing someone who looks like you is successful can play a key role in building confidence and encouraging individuals to take the first steps in their careers.

She also said that volunteering as a mentor has helped her grow as a professional. “It’s a mutual exchange of knowledge and ideas,” said Tedrick. “Sometimes it’s okay for your way of thinking to be challenged, and even if you’re the person giving advice to someone younger than you or in a different place, they can still have very insightful things to offer and to learn from.”

Tedrick says effective mentorship is about taking time to build meaningful and lasting relationships. “It’s not just taking a phone call with someone or having a brief conversation,” she said. “It’s a relationship that has to be beneficial and meaningful for the mentee, which could mean having a difficult conversation with them, helping them navigate a complex problem, or partnering with them to get to the root of what they are trying to accomplish and understanding where they want to be.”

Mentorship programs play a critical role in expanding diversity in tech because they help inspire confidence in those who might not think an IT career is for them. Tedrick reflected on her career path and said she initially didn’t pursue a career in IT because she felt like it was something only others could do. But seeing women leaders in tech speak on panels and finding a mentor helped inspire her – and now she’s working to build that same confidence with the next wave of innovators.

When asked about advice for young women who are considering a career in IT, she said, “Don’t let others who can’t see the vision get you down. I want to say everybody on my journey was supportive, but some weren’t. When you’re having those low moments, acknowledge them but keep moving on and know that you have a community of support to fall back on.”